Welcome to the Red Wing Regional Airport Unmanned Aircraft Systems (UAS)/Drone information page. This page is not intended to replace knowledge of the operating rules required by the Federal Aviation Administration (FAA) for commercial or hobby/recreational users but is intended to highlight flight paths and airplane operations around the Red Wing airport (KRGK) to increase SAFETY for both aircraft and UAS vehicles operating within a 5 mile radius of the airport. The intention of the information provided is to give the UAS/Drone pilot an idea of where to look for and anticipate where aircraft may be.

The FAA has developed an app which details 5-mile radii around public use airports throughout the U.S. It is called B4UFLY and can be downloaded for free. Operating rules for the Hobby/Recreational UAS (non-commercial) are the same as for model aircraft which are based on a community set of safety guidelines developed by the Academy of Model Aeronautics. A link to the FAA's Fly for Fun website contains a complete set of rules/guidelines.

The important rules are that:

The Red Wing Regional Airport recommends that every UAS operator log-in to www.airmap.com or download the free “AirMap For Drones” app available for both Android and IOS devices. The registration is free and upon signing in, Airmap will provide:

There are two ways to comply with the FAA regulations of notifying the airport prior to drone flights.

For the Commercial operator Federal Aviation Regulation (FAR) Part 107 applies and you must complete the required testing before you can operate as a commercial drone pilot. The airspace around the Red Wing Airport is Class G and the rules governing operations in Class G airspace apply.

The FAA allows UAS pilots to fly within 5 mile areas around airports. As the owner of the Red Wing Airport, the City of Red Wing will comply with the FAA. However, we urge UAS pilots to exercise additional caution when operating within the radius. Safety is the number one concern for the City; safety for both Airplanes using the airport and UAS/Drone operators flying nearby.

If you have additional questions or concerns, please contact Red Wing airport operations during business hours at 715-594-3701.

The Red Wing Rgnl map identifies variable risk areas in and around the Red Wing Regional Airport. Extreme caution should be used when operating your UAS/drone.

The “red” area identifies airport property. Prior to operating your drone, you are required to notify the airport manager at 715-594-3701.

The “orange” areas identify high risk areas where manned aircraft may be flying at low altitudes approaching and departing from the Red Wing Regional Airport.

The “green” areas identify initial approach areas where caution and awareness are important. 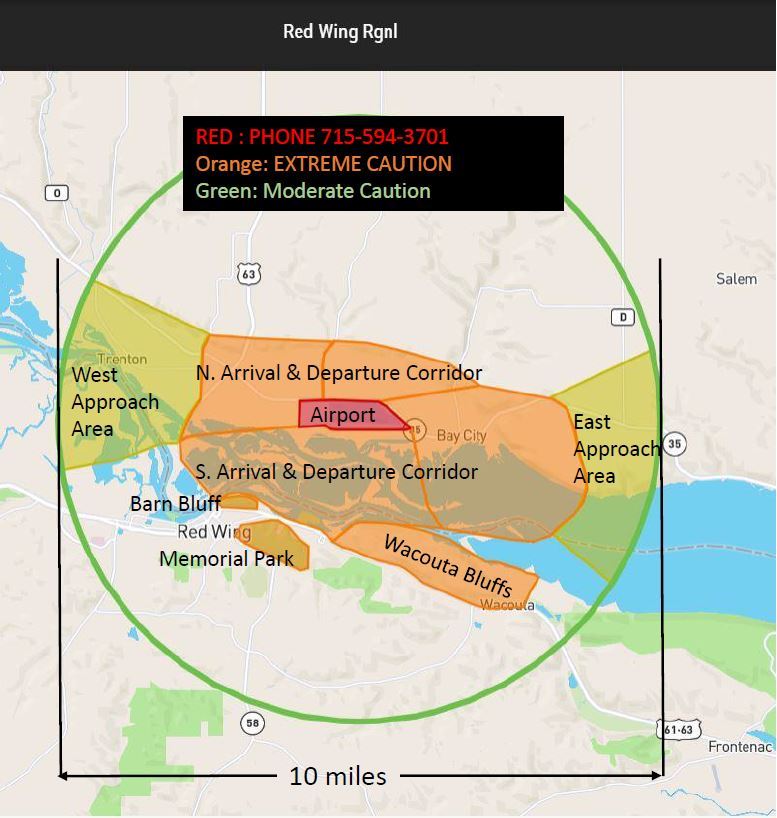