James Daily, Chief of Police of Red Wing, was mortally wounded in the line of duty by August Bloom in the Sibley Hotel (site of the Conoco Station West 4th Street and Bush St). Bloom fired two shots at Chief Daily, one entered his body in the abdomen and the other in the shoulder. He died of his wounds the following day.

Chief Daily was born in Palmyra, Missouri on February 18, 1863 and was 43 years of age when he died. He came with his parents to the City of Red Wing when he was a boy. Here he grew up and attended the public schools. After leaving school, he went west and worked in many of the different cities of the Rocky Mountain and Pacific Coast districts. However, most of his work was in Seattle and Butte. He became a skilled plasterer and when he returned to Red Wing, he engaged in the same business. 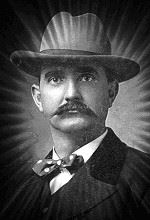 When John H. Rich became Mayor, Daily was appointed Chief of Police and was re-appointed by Mayor Pierce. He served in this position for six years.

Chief Daily was married on February 11, 1902 to Mary Dawson, a teacher at the Training School. They had a son, James Dawson Daily, who was born on June 9, 1905. He was a member of St. Joseph’s Catholic church. He was also a member of several fraternal societies, among them the Elks, The Knights of Pythias and AOUW.

As Chief of Police, he made an exceptional and unique record. He was a great big-hearted man, full of sympathy that comes from the kindest impulses, and made practical by a wide experience in meeting all kinds of people. He met men and felt genuine interest in the humblest, the poorest and the most unfortunate and the most unworthy. He saw beneath all the distinctions that are more apparent than real in human society and endeavored to meet every person whom he came in contact as a friend. The qualities bound him closer to the hearts of the people and it was because of this that Red Wing mourned his loss so sincerely.

In his last hours, he was conscious. All day before he died, his mind was clear and he met the issue of death with the same fearlessness with which he had met life. He expressed no malice toward the man who was the cause of his death; only regretting that life could not be longer because of the love he bore for his devoted wife and son. In his dying moments his wife and son were at his bedside and his last wishes were for them.