Jay McCleary, the award's namesake and the first recipient of the award, worked for the City of Red Wing for over 34 years and after retirement served as a long-term volunteer for the Red Wing Sustainability Commission.

Jay was a champion for sustainability and played a pivotal role in having the City install solar electric arrays at the fire station, Waste Campus, Community Development/City Hall, and Public Works facilities. This work, coupled with the City's solar garden subscriptions, has resulted in 120 percent of the City's total municipal electricity consumption coming from solar since 2019. Jay' s work in implementing Green Steps "best practices" helped position Red Wing at the top level in the Green Steps city sustainability rating program. Jay also helped bring recognition to Red Wing's sustainability efforts by volunteering to travel and speak to other communities, even attending a national conference in Philadelphia to speak about Red Wing's sustainability commitments, in particular, their solar arrays. Jay also participated as a volunteer for the Red Wing Energy Action Team, resulting in the completion of the City's Green Wing Energy Action Plan. The plan helped encourage residents and businesses to engage in conservation programs to lower their overall energy demand.

Jay passed away in November 2021 and was unable to receive this award in person. His wife, Nancy McCleary, accepted the award on his behalf at the January 10, 2022, City Council meeting. 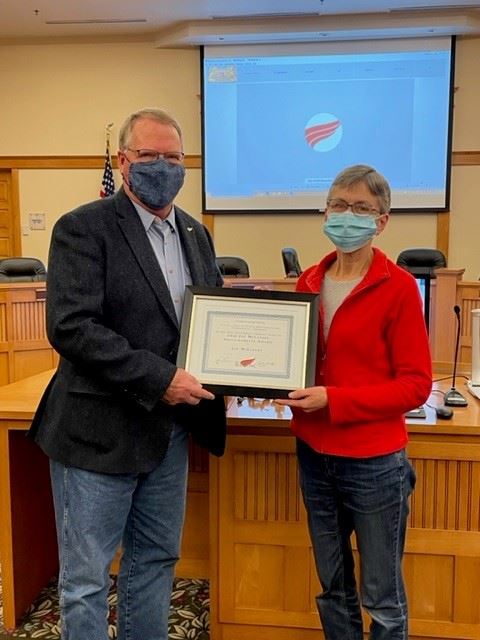 The award is open to individuals, businesses, and organizations. Residents may nominate their own projects or be nominated by another party. Nominations are open until February 28, 2022.

A selection committee of the Red Wing Sustainability Commission will choose the award recipient. The winner will be announced during Earth Week in April.