In September 2019, Red Wing switched to a single-sort recycling program. In addition to an easier recycling process for residents, the single-sort program utilizes 96-gallon rolling carts that are collected every other week.

An independent organization helped the City study the program’s success by examining the change in recycling habits of 108 single-family households before and after the new cards were rolled out. Now the results are in!

Questions about the single-sort program? Check the FAQ PDF below for answers to the most-asked questions. Not finding the answer to your question? Call the Waste Campus at 651.385.3658 or send them an email.

The City of Red Wing first began operating a recycling collection service in January 1994. The Public Works Department’s goal is to reduce the amount of waste going to landfills and to promote a healthy and sustainable future for the community. Red Wing residents have helped reach this goal by steadily increasing the volume of refuse diverted from incineration and being recycled instead. The active participation of residents is key to the success of the program. 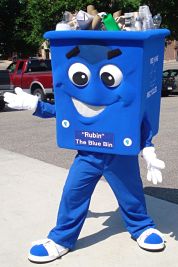 Recycling containers must be placed at least 4 feet away from your garbage can or any other obstruction (pole, mailbox, etc.). One suggestion is to place your recycling cart on the opposite side of the driveway as your garbage can.